This recipe comes practically directly off the back of the bag of Nestle white chips.  Technically,these “morsels”, as they are called by Nestle, are not actually white chocolate as they don’t contain cocoa butter, a derivative of cocoa (instead they use an cheap substitute of hydrogenated vegetable oils such as palm kernel which are in these and they also don’t have any of the “good” qualities of chocolate like antioxidants), but, oh well, they are still tasty.  I did add a bit of cinnamon to the recipe in addition to Craisins. 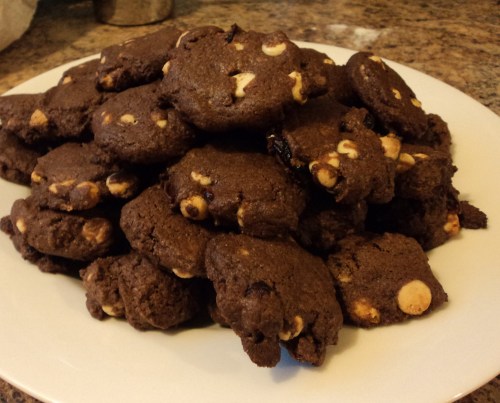 Preheat oven to 350 degrees.  Combine flour, cinnamon, cocoa, baking soda, and salt in a mall bowl.  Beat butter, granulated sugar, brown sugar, and vanilla in large mixer bowl until creamy.  Add eggs, one at  a time, beating well after each addition.  Gradually beat in flour mixture.  Stir in morsels and Craisins.  Drop by well-rounded teaspoons onto an ungreased cookies sheet.

Bake 9-11 minutes or until centers are set.  Cool on baking sheets for 2 minutes, and then remove to wire racks to cool completely.